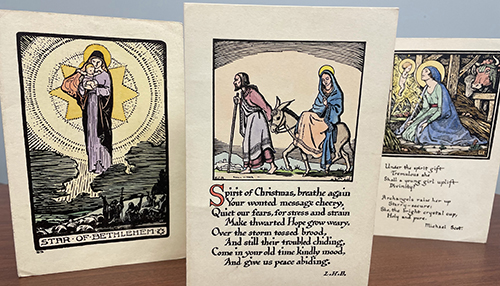 Christmas at the printing house

While many of us haven’t sent (or even bought!) This year’s Christmas cards yet, there are probably several early risers already gearing up for next year’s bundle.

A holiday tradition for over 175 years, the first Christmas cards were created and sent to social circles from early Victorian England to the 1840s. It is believed to have been initiated by the scholar and patron of the Sir Henry Cole arts, the tradition initially did not spread for decades, especially in the United States.

Sarah Burke Cahalan, Director of the Marian Library, shares her thoughts on the collection and the little press cards she finds most special:

These particular cards are exceptional because they are not standard Christmas cards produced in series, but produced as part of the twentieth century revival of small press and letterpress printing. They were produced by small printing presses which also reportedly produced some very nice limited edition books. They were added to the collection as they became available on the market or by donation.

This is a 1937 map by Mary Dudley Short, featuring a woodcut printed at the Ditchling Press, part of an early 20e community of artists of the century in England. (The woodcut technique is related to traditional woodcutting, but updated for harder woods like boxwood, allowing for more detail.) In this card, the infant Jesus pulls on his mother’s scarf while she holds him firmly in her lap. Are they perhaps playing a game of cuckoo? the Ditchling Arts and Crafts Museum posted a few images of other Christmas cards by this artist, as well as some biographical information – always useful for artists who have changed their names in their lifetime!

Another woodcut is from a drawing by Elizabeth Rivers. This Christmas card was printed in Dublin, possibly around 1946 when the Cuala Press printed a book created by Rivers (it’s number 96 on the card list printed by the press.). Like Ditchling Press, Cuala Press was associated with the arts and crafts movement; unlike other workshops related to this movement, it was led by women and often featured female artists and writers. This card showcases the fine details of Rivers – it fits the Virgin Mary, baby Jesus, and three angels under 2 x 3 inches. The card also features a Christmas carol in Middle English about the Annunciation.

Jumping to another continent and adding a bit of color, the Marian Library collections include a four-color woodcut of a reflected Virgin Mary. It was printed for Fran and Ted Lilienthal by Mary Grabhorn at Grabhorn Press, a San Francisco press founded by her father and uncle. The press was active from around 1920 to 1965. Although this Christmas card is not dated, the style resembles that of Mary Grabhorn work in the 50s. Another remarkable thing about this Christmas card is its size. Unfolded, this is a full folio sheet approximately 14 x 19 inches. It’s hard to imagine dropping such a card in the mail.

We must also mention the Christmas images of Gwen Raverat. Although not cards, they are important examples of woodcut by an innovator in this field. She frequently returned to the animals that shared the stable with the Holy Family, especially in “The Cow’s Christmas” from 1931, where the child is tended by vigilant cows. Although not originally produced for this purpose, these images remain so charming that they are often printed on Christmas cards today.

The Marian Library is also delighted to share that we have just added three more Cuala Press Christmas cards to the collection, which can be viewed here. The oldest (in the center) dates from 1908.

The Marian Library also offers the university community a number of electronic cards for last-minute needs.