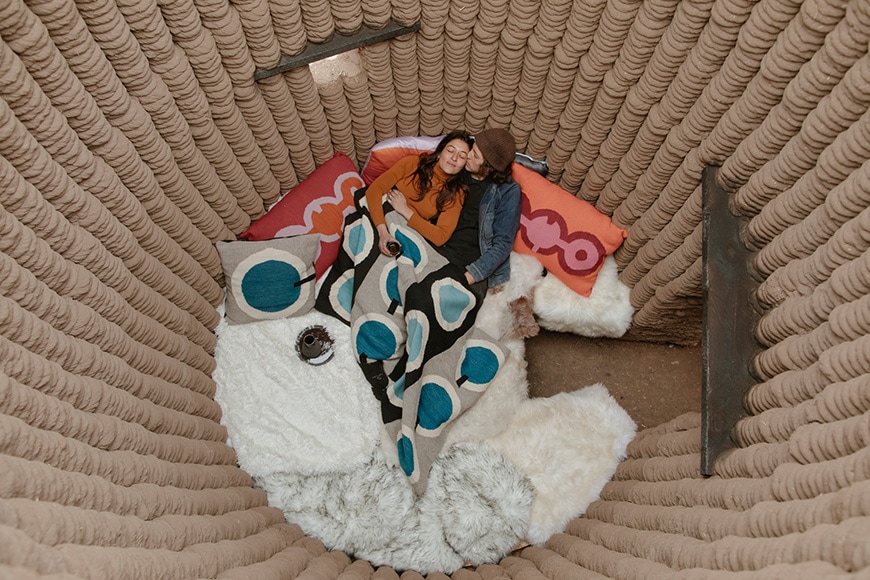 Designed by based in San Francisco Emerging objects, a “3D Printing MAKE-tank” founded by American architects Ronald rael and Virginia San Fratello, Casa Covida is a small, 3D printed mud house for two located in a high mountain desert in the San Luis Valley of Colorado.

The project was developed during the coronavirus pandemic (hence the name) both as a prototype cohabitation space during the Covid-19 era and as a 3D printed sustainable experimental house for extreme environments such as high deserts Americans.
I suspect that Rael and San Fratello designed Casa Covida also as a provocation on the subject of self-isolation in today’s world, so I think it should not be taken too literally. , from a functional point of view.

The house can be covered by a pneumatic balloon-shaped roof; © Elliott Ross.

Made of adobe – a mixture of clay, sand, silt, clay, water and straw – a traditional local building material, the building was produced by additive manufacturing on site by a 3D printing system, produced through Potter 3D Inc, composed of a portable 3-axis robotic arm and a stator-driven mortar pump. After printing an adobe layer about 400/500 millimeters thick, the material was allowed to dry and harden in the sun. The soil for the adobe mixture was excavated a few hundred meters from the site, combined with water and locally sourced chopped wheat and barley straw, and mixed by hand using traditional techniques. before being loaded into the pump of the 3D printing system. This ingenious combination of traditional indigenous materials and innovative building technology is certainly one of the most interesting aspects of the Casa Covida experience.

A Potterbot Scara V4 3D printer similar to the one that was used to make Casa Covida; image courtesy of 3D Potter Inc.

The house is made up of three interconnected, almost identical cylindrical modules. The modules are roofless since the San Luis Valley is characterized by one of the lowest rainfall levels in the world with around 228 mm of rain per year; however, if necessary, each module can be covered with a pneumatic roof to shelter occupants from occasional rain and to keep the interior space warmer, especially at night and in winter. The magenta-colored balloon-shaped roofs of the house, installed above the modules, make Casa Covida look like a bouquet of giant hedgehog cacti in bloom in the middle of the desert.

Each of the three modules houses a different functional space – a living room / kitchen, a bathroom and a bedroom. The living space contains a small fireplace and is furnished with two earth benches covered with woven textiles; the in-house cookware, which is made from local micaceous clay, is also 3D printed. The sleeping area is furnished with beetle pine flooring * covered with sheepskins, woven wool blankets and cushions. The bathroom contains a circular tub surrounded by black rocks. Casa Covida’s other wooden elements – including four lintels and the front door – are made from locally harvested, charred beetle pine.

* Pine beetle is a high quality wood for paneling and flooring from pines that have been killed by a small bark beetle (Dendroctonus ponderosae). A fungus from the beetle naturally discolors the wood and gives it a special blue tint.

A view of the living / kitchen area; photo © Elliott Ross.

The sleeping area is covered with sheepskins, blankets and cushions made in collaboration with local artisans; photos © Elliott Ross.

A view of the swimming area; photo © Raël San Fratello.

2021-12-17
Previous Post: What does 3D printed skin care have to offer?
Next Post: Chandler’s Show Celebrates the Magic of Quilt History