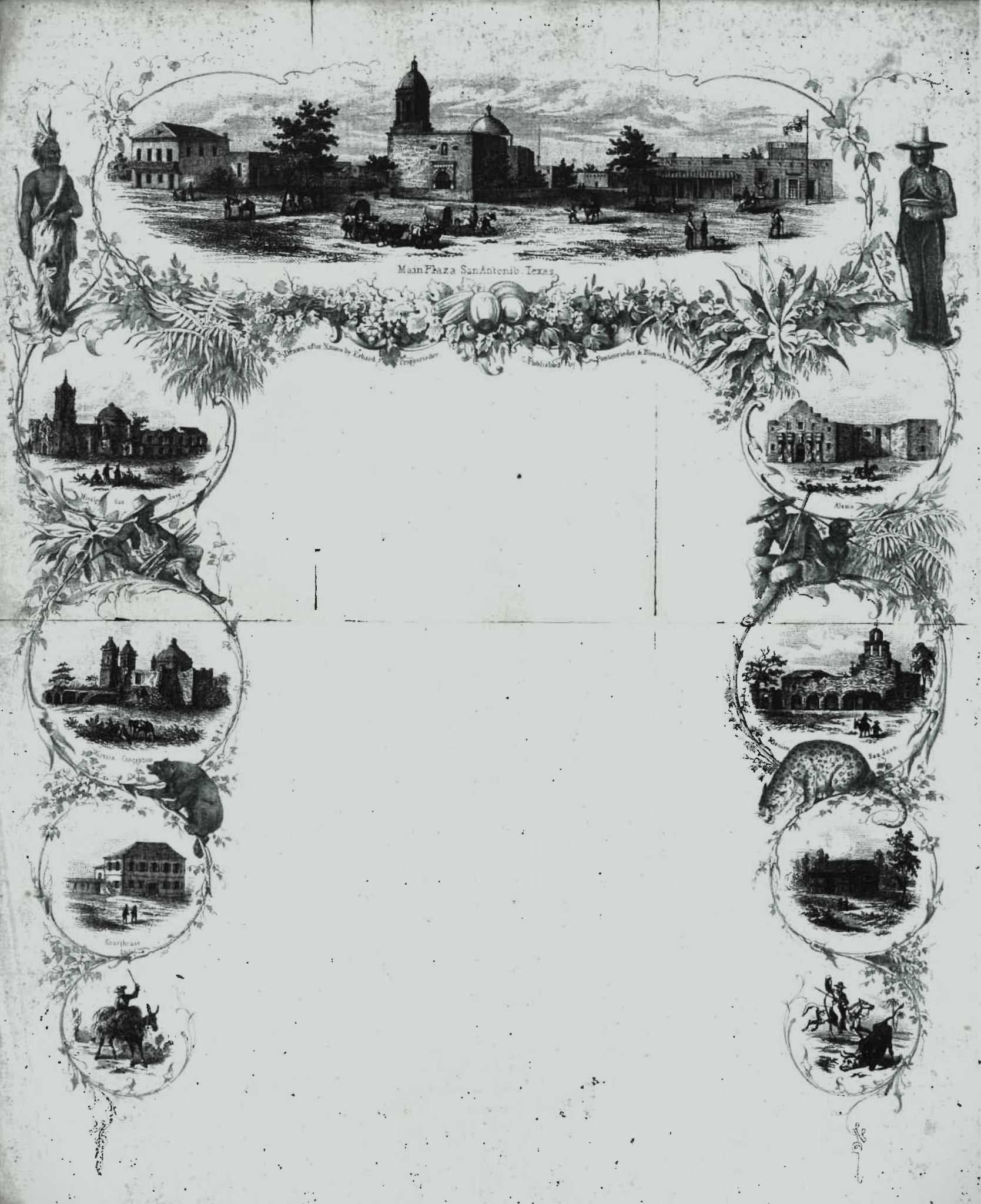 I most enjoyed the articles on the Peacock (Military) Academy and others. I just thought you might like to see this beautiful depiction of the school. Unfortunately I can’t find any indication of the identity of the artist, only a small note on the left side that says “Maverick-Clarke, SA Tex” which is a company attached to a number of old drawings like this one. Maybe they had an artist on staff who did the job. I’m quite amazed at the detail and how long (this illustration) must have taken for (the artist) to remain anonymous.

From the mid-19th century, as printing processes improved, illustrated letterheads became an important promotional strategy, creating an often idealized image of attractive premises in a prosperous setting. Drawn freehand or from photographs, images were engraved and printed on paper for correspondence, as most business was done by letter until telephone use became common. They served as a logo, creating a favorable first impression of the company and its surrounding community, with a more or less literal, albeit enhanced, visual of the company’s premises and where it was located.

One of San Antonio’s best-known pictorial letterheads was designed by German-born artist Erhard Pentenrieder, whose vignettes of the main plaza and other landmarks are arranged along the top and sides two sides of stationery first published in the 1850s and reprinted well into the 20th century. century.

Scenes from San Fernando Cathedral, the Alamo, and other Spanish colonial missions, interspersed with depictions of frontiersmen and Native Americans, gave the city a romantic charm when it was new. The drawing, drawn freehand, has aged well because once the vaqueros and wagons disappeared, their presence on paper plunged the city into the soft light of history. A local business using this letterhead was writing from a place with a colorful Western heritage, but up-to-date enough to have access to trained artists and high-end boutiques like Pentenrieder & Blersch, whose shop was on the main place of commerce. Street.

At the time of the 1910 letter from Wesley Peacock Sr., owner-operator of the Peacock Military School (later Academy), the institution was 16 years old. The campus itself was central to the header, thus integrating the representative into its suburban West End (later Woodlawn) neighborhood, with a spacious campus, many buildings, uniformed cadets on the parade ground , a tall mast and a practical church. just across the street.

Donna Peacock, granddaughter of Professor Peacock, as she was known, and author of ‘Parade Rest’, a two-volume history of the school, has no header information but has identified the buildings that would have been there at the time the note was written. These were “The Brick” (later Johnston Hall), the main building; a canteen known as “The Exchange”, run by student vendors; the residences of Professor Peacock and his family; refectory, infirmary and armoury; and East Barracks (later McKinnon Hall). In context, they look neat and the right size for their surroundings – substantial but not overly cluttered. Peacock was headmaster of the school, but the other names on the letterhead show that he is no longer going it alone as he was in the announcement of the school’s founding in 1894 (“I give me -even all the instructions”).

It was the header that would have been received by potential families, vendors, bankers, and anyone else who might derive a positive impression from its portrayal of the school. Here it is used for a letter of condolence to an acquaintance – probably Benjamin Wyshe (also sometimes spelled “Wysche”), who was the first librarian of San Antonio’s first true public library, the Carnegie Library (1903-1929) completed in 1903 with funds donated by industrialist Andrew Carnegie.

Wyshe was a professional librarian who received a bachelor’s degree from the University of North Carolina and completed “librarianship training” at Amherst College, according to the Dictionary of North Carolina Biography. He came to San Antonio after serving as a librarian at the University of Texas from 1897 to 1903. He married his first wife, Zoa Knowlton Woodward (who went by the name “Knowlton”) in 1898; the couple had no children and she died on November 17, 1910 of “surgical shock” (excessive blood loss and low blood pressure) days after a hysterectomy to treat fibroids (the typical treatment for era).

Peacock, who admits having also lived “the shadow of death”, invites Wyshe to dine at his place. The school’s founder had lost his first wife, Seline, mother of his first son, Wesley Jr., in 1898; a few years later he married Edith Wing, with whom he had three more children. Perhaps he wanted to give the librarian hope through his own example. It may have worked, since Wyshe remarried in 1914 to Ethel Cheshire Deaver, and they had two children together.

Wyshe was a popular guest speaker at clubs and conferences, so he and Peacock may have known each other in educational circles, but they were also both members and officers of the Methodist Epworth League for Young Adults. (This church across from Peacock’s school is West End Methodist.)

More from Paula Allen: A family school closed instead of changing

The Maverick-Clarke Litho Co. – referring to ‘lithography’, a printmaking process – was a prominent local printer founded in 1874 by, yes, one of those Mavericks, Samuel Maverick Jr., who was also a farmer, trader, and banker. It became Maverick-Clarke in 1895, renamed to reflect a partnership with relocated Galveston printer Robert Clarke, according to Clarke’s entry in the Handbook of Texas.

In 1929, a Maverick-Clarke newspaper advertisement included an excerpt from a Joske Bros. which featured a photo of the department store and touted the printer’s “design quality” and “over 30 years” of providing businesses with “business-like letterhead.”

This indicates that emphasis was placed on this part of the printing press as early as the turn of the last century, around the time that Maverick-Clarke announced, “We have it – the only copper-plate press of this city,” in a series of 1901 advertisements in the San Antonio Light. “Don’t get your copper work sent back, because we have the best engraver in the South and can fulfill your orders quickly and in the latest styles.” (It was not unusual for San Antonio businesses to send work to out-of-town printers and publishers, as CH Guenther Flour Mills and Hotel Menger did, in conjunction with John Gast of St. Louis to develop their headers.)

Perhaps the “best engraver” was Fred (also “Frederick” or “Friedrich”) F. Weiss, a German native who apprenticed in the printing press at age 17 in 1894. By the time he had The 21-year-old “popular engraver” was congratulated on his milestone birthday in the light, December 4, 1897. From San Antonio city directory listings, it appears he may have changed his profession later, but that he might have been with Maverick-Clarke when Peacock commissioned his stationery – which may have been years before the date of Wyshe’s letter.

Anyone with more information on the identity of the Maverick-Clarke artists can contact this column.