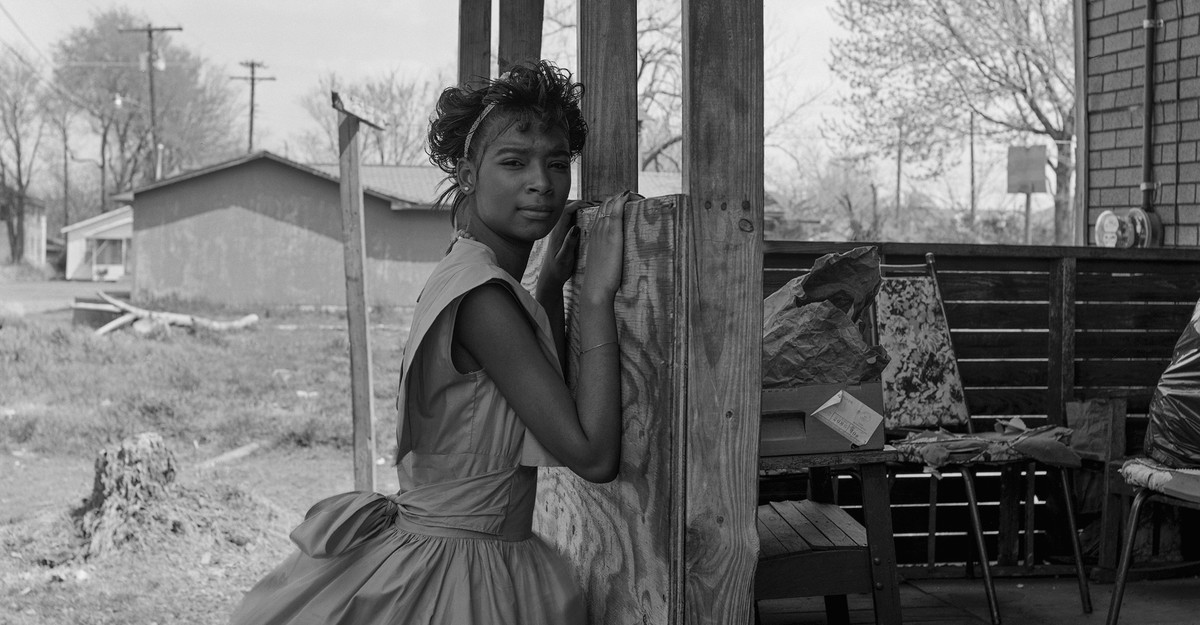 One of the first photographs I fell in love with was that of Robert Frank July 4, Coney Island (1958). Night has fallen on Coney Island. The sky, which spans the upper third of Frank’s photography, appears to be painted solid black. In the foreground, away from the crowds in the distance, is a handsome young black man, his back to the debris left in the sand. He is lying alone, asleep, curled up in a fetal position, his prayer hands folded between his knees. He is barefoot, in long pants and long sleeves.

Something, I now realize, was missing from Frank’s photograph, although one could perhaps say that something was faulty, confused, in me. I can’t feel the same romance anymore that I felt for that boy lying alone on Coney Island. Or rather, what I thought was a romance had actually been a heartbreak. I desperately wanted, years ago, to have enough money to buy a copy of Frank’s photograph at Coney Island. Now I know I wanted less the picture and more the boy, that I imagined my acquisition might somehow bring him out of the cold.

Read: The life of a little black boy in America

Of course, that was not possible. A photograph may change little or nothing at all, but it does. recallraise your hand in the desert of oblivion, of obliteration and say: I was there. Let me tell you what I saw. Yet so many photographs of black life – especially by outside chroniclers – seem to have seen so little, so missed, forgotten that we are not just lonely, pitiful wanderers on America’s white beach. This is why I was moved, even surprised, by the work of Baldwin Lee.

Born in Brooklyn in 1951, Lee grew up in Chinatown, a world he says “didn’t stretch too far from my skin.” After college at MIT and an MFA at Yale, he was eager to get out of the stale, elitist milieu. He moved to Knoxville, where he taught photography at the University of Tennessee. Then, in 1983, he hit the road. In the mud of the American South, Lee drove his Dodge Dart Sport out of Knoxville, to Memphis, up the Mississippi River through the Delta toward New Orleans; it then proceeded east along the Gulf Coast through Alabama; in Tallahassee, Florida; then north through Macon and Atlanta, Georgia; and return home. Along the way, he stopped and walked the streets, taking the first of 10,000 photographs that are just beginning to be published and critically engaged withmore than 30 years later. His first monograph came out yesterday, and his first personal exhibition will open At New York this month. Such attention is disorienting for the somewhat reclusive Lee, but not as overwhelming as his first trip to the South. When I spoke with Lee last spring, he described this experience as “being swimming, and then all of a sudden you’re caught in a vortex.”

He had swum so far in what seemed to be the best photographic waters, trained by the giants Minor White and Walker Evans. He had slept in an unmade bed last occupied by Lee Friedlander. He had mastered photographic printing, studied the history and technical aspects of craftsmanship. And yet he had, up to that point, produced photographs that Irving Penn declared “dead” in Lee’s last MFA review. Dead perhaps because Lee hadn’t found his subject – or because his only subject had been the photograph itself. Everything changed in the South, where the black Americans he met radicalized him. “I discovered that I was a political being,” he said. He understood, in part through his own upbringing as the son of Chinese immigrants, oppressive systems and subtle conditioning who shaped the lives of those he met. He saw his camera less as a propaganda machine than as a tool to testify that these lives, mundane and epic and “graceful,” mattered.

The black-and-white images Lee made during this time, taken with a labor-intensive large-format camera, are notable not only for their technical virtuosity. Their power, I would say, stems from Lee’s moral clarity. His subjects weren’t just symbols or props to take as he sped through town; they became collaborators—”stars,” in Lee’s words.

Lee is not Evans, whose legendary Depression-era photographs document Southern sharecroppers. For this we should be happy. Although Lee learned much from his teacher, he also felt that “the assumption that Evans sympathized with the sharecroppers he photographed in Alabama should not be unchallenged”. Lee, like any great student, partly came to the South to dismiss his training, to reject a way of life and an art that he found tragically myopic, this aroused in him a just indignation. This does not mean that he had a social mission. “I didn’t go with a simple statement that I wanted to expose the injustice that black Americans had to endure,” Lee told me. “He’s not some kind of idiot, kumbaya benefactor.” Nor do his photographs reflect a photographer who wandered the streets of the South the way Jack Kerouac wandered the streets of Denver, “wishing to be a nigger, feeling that the best the white world had offered wasn’t ecstasy enough. not enough life, joy, kicks, darkness, music, not enough night for me. No, Lee’s photographs are the startling products of a man who knew he knew nothing at all – and chose to change that.

Lee’s camera, which was large enough to immediately grab attention wherever it went, forced him to engage, intimately, with the people he hoped to photograph. This kind of contact is rare in America, so rare that our distance from each other, physical and psychic, brings us closer every year, it seems, to civil war – or at least an internal cold war. Lee’s body of work bears witness to a teaching from civil rights attorney Bryan Stevenson, who did lifesaving work to free wrongfully convicted prisoners and led efforts to build a national memorial to lynching victims. . All of his Herculean endeavors are based on a simple mantra: “There is power nearby. Lee’s work aligns with Stevenson’s efforts to reach out to the excluded and to commemorate a history that has long been ignored or even erased.

Check out Lee’s image of a dignified man sitting on his porch holding a church fan with Mahalia Jackson’s calm, angelic face imprinted on the front. According to Lee, the man’s name is James White, of Valdosta, Georgia. Lee had seen White digging in a dumpster earlier; he saw him again outside on his porch, sitting on a metal chair. After some small talk, Lee asked to take a picture; a few shots later, White invited Lee inside his house. He handed Lee a wad of envelopes — letters from the military, the Social Security Administration, and private insurance companies regarding the death of White’s son, who had served in the military. Lee reviewed the papers and informed White that he was owed a lot of money. White told Lee he didn’t have a bank account. So Lee and White went to the bank, where Lee says White signed his application with a X. Then Lee himself went to the Social Security Administration in Knoxville to make sure White got his money, which he did. Lee recalls, “On my next trip to Valdosta, I went straight to his house. The glow of being a benefactor immediately went out. I was surprised to find Mr. White on his porch, sitting shirtless and unconscious, his stomach and knees covered in vomit. Next to him was an empty 1.75 liter bottle of cheap gin. As I was standing there, a man approached and asked me if I was the person responsible for getting his money for Mr. White.

“‘He’s going to get drunk to death on this money,’ the man said, ‘and it’ll be because of what you did.'”

Sometimes a picture captures a thousand losses. There was more to White than this photograph, strong as it was. Lee made those 10,000 images because he knew the limitations of a single image. He knew that even 10,000 couldn’t say it all.

This, I believe, is the promise of archival recovery: we can get a fuller look at lives like White’s, which are so often flattened into stock market numbers, even outright farce. We can begin to understand their complexity.

It is also the promise of rediscovering the work of Baldwin Lee.

Our historical record would be poorer if it did not include Lee’s image of a group of children pressed against a screen door. Even when he depicts them, he accepts the intimacy of this heavy screen. Who knows what’s in this house, who else is in this house, who are these children to each other? All I know is that I’m grateful that the man behind the camera pushed away sentimentality and exploitation, refused any temptation to do a “Photography About Poor Black Children”, and simply stood at a good place, closeand tried to see these children in their raw, strange magic, in their beautiful particularity.

Of all the photographs Lee took from 1983 to 1989, one without a human subject stands out as the perfect thematic image: a dead armadillo in Waterproof, Louisiana, that appears to have been struck by lightning. My gaze moves from the fried armadillo, along the long dark road, back and forth to fixate on the electric bolt that has stretched and stuck into the Earth. I ask, Until what point? How far from here to Armageddon? The viewer stands with death, watching the destruction. Isn’t this view also true for black Americans in this country? Isn’t that our story for over 400 years? Baldwin Lee’s photographs say, Yes, but there is more. Death and destruction may litter the landscape, but Lee’s image collaborators remind us that there’s beauty beside the ashes. There is, despite everything, an insistent life.

This article is adapted from the monograph Baudouin Lee.

When you purchase a book using a link on this page, we receive a commission. Thank you for supporting the Atlantic.